The Ottawa Real Estate Forum 2017 took place in October on the Tuesday of the week the Amazon HQ2 bids were due on that Thursday. Not surprisingly, the Amazon requirement worked its way into most of the presentations and panel discussions throughout the day. Fortunately, one of the active participants in preparing the Ottawa/Gatineau bid was a panelist at the Forum, and she had very specific instructions as to what questions she could answer, what her answers could be, and what questions she was to avoid. Within days after bid submission, the National Capital Commission had released this information about the Ottawa bid.

As the capital of the country, the Ottawa market is usually dominated by the activities of the federal government as it relates to their need for office and industrial space to house their operations. What was notable this year was how the Forum was far more focused on the tech community, as it was dominant in the notable lease transactions and new builds completed.

Ted Fobert of Fotenn, partner in a long-time local urban planning firm in Ottawa hosted a panel consisting of developers involved in very big and very exciting new and recent “community-building projects” in Ottawa. There was Ottawa Sports and Entertainment Group (OSEG) talking about Lansdowne, Windmill Development Group talking about Zibi, eQ Homes talking about Greystone Village and Trinity Group talking about Trinity Centre at Bayview Station. Indeed, all these developments are very big and very exciting, but what is becoming overwhelming to some people is the scale and interest in levering the growth accelerant resulting from the completion of light rail transit in Ottawa.

Fobert said, as part of his preamble to the panel discussion, that Greater Ottawa now has a population of 1,500,000, and that is a milestone. That puts the Ottawa (province of Ontario) portion of this number at about 1,000,000, and the Gatineau (province of Quebec) portion at about 500,000. We believe there is a magic in the growth and development of cities once they cross the million-person population threshold as they begin to experience the advantages and strengths that scale brings, as more and more businesses and cultural enterprises find sufficient people to allow them to thrive.

Ottawa hits above its weight class in terms of cultural activities as a result of being the capital of the country. We are home to national museums and galleries, and of a scale, quality and quantity that most other North American cities with a CMA of 1,500,000 +/- would struggle to match. Part of Ottawa’s appeal to tech firms like Amazon is in its ability to provide all those live and play elements they wish to offer their employees in a city with fewer people and less congestion and shorter commute times you might otherwise encounter.

Bernie Ashe from OSEG said something similar. He said part of the problem they have at Lansdowne now is that the site is not intense enough, in that there is a very large portion of green space that has hindered the number of units built to house people. With fewer people, the retailers all suffer a little as it is harder to drive sales.

This increased population brings the soon to be delivered Light Rail Transit (LRT) system into greater focus. We still suspect most residents of Greater Ottawa do not fully appreciate how this LRT will change life here. The residential development community does appreciate what that change could mean, and the projects listed above are good illustrations for just how dramatic that change may become.

The groups who understand this phenomenon better are all those firms in multiple cities, some of which have light rail or a subway, and some of which don’t. They appreciate what this change will mean for their ability to attract and retain talent. It reinforces Ottawa as an alternative to Austin or Pittsburgh or Columbus or Indianapolis or Nashville, for all those firms who are tracking the market analysis that Amazon is uncovering in its site selection for HQ2. 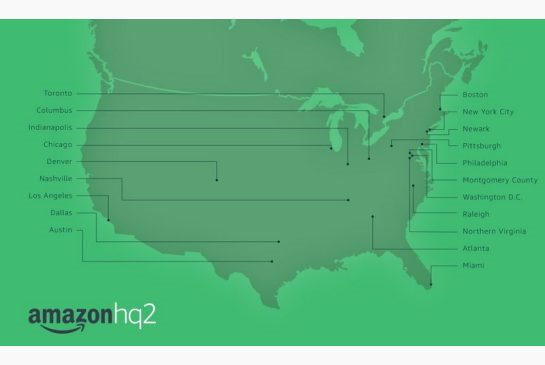 Kelly Daize, the Market Director, Americas from Invest Ottawa (the economist development entity of the City of Ottawa) was one of the panelists in the session that discussed the tech ecosystem in Ottawa. Daize was part of the Amazon HQ2 bid submitted by the City of Ottawa in conjunction with the City of Gatineau. The panel was considering whether Ottawa is a tech hub, and if so, what was the foundation of its beginnings as a hub. She said:

“…it is the research labs of the federal government. There are 62 of them….”

We had long suspected that the government labs here are the basis of the strength here for this tech ecosystem, as tech here usually means research and development (as opposed to venture capital activity). We are familiar with the Communications Research Centre (CRC), the client-driven applied research centre for advanced telecommunications. It is close to the campus that Bell Northern Research (BNR or Big Nerd Ranch for some of us) operated and that became Nortel Networks. The Nortel Networks campus is east of CRC, while the Kanata North Business Park is a little west. The Kanata North Business Park features all those Fortune 500 tech firms involved in the infrastructure that makes the World Wide Web with origins in telephony. The firms here are mostly engaged in research and development (R&D).

The scale of Nortel R&D at its peak circa 2000-2002 in Ottawa was impressive. Nortel employed 16,000 people and budgeted US$2 billion annually. Ottawa represented about 50% of its R&D operations worldwide. Most of this R&D talent stayed in Ottawa post high tech wreck circa 2002, and that much of that talent was picked up by firms like Ciena, Ericsson, Avaya and Genband, amongst others as they purchased Nortel Networks business lines.

More recently, Ciena built a new R&D facility here, levering the talent and patents gained in buying a piece of Nortel, and it represents about 50% of the US$ 500 million that Ciena commits to R&D annually. It now employs about 1,700 people in Ottawa.

The big change in Ottawa from the previous tech boom of 1996-2002 is the diversity in the employment base. The previous boom was driven by Nortel and JDS Uniphase, whereas now the number of firms is greatly increased, their financial strength is greatly increased with many more publicly traded companies and Fortune 500 firms locating R&D operations here. All these firms have much more solid foundations having survived the 2002-2010 downturn.

The infographic that the Kanata North BIA has prepared gives an illustration for how that part of the ecosystem has matured: 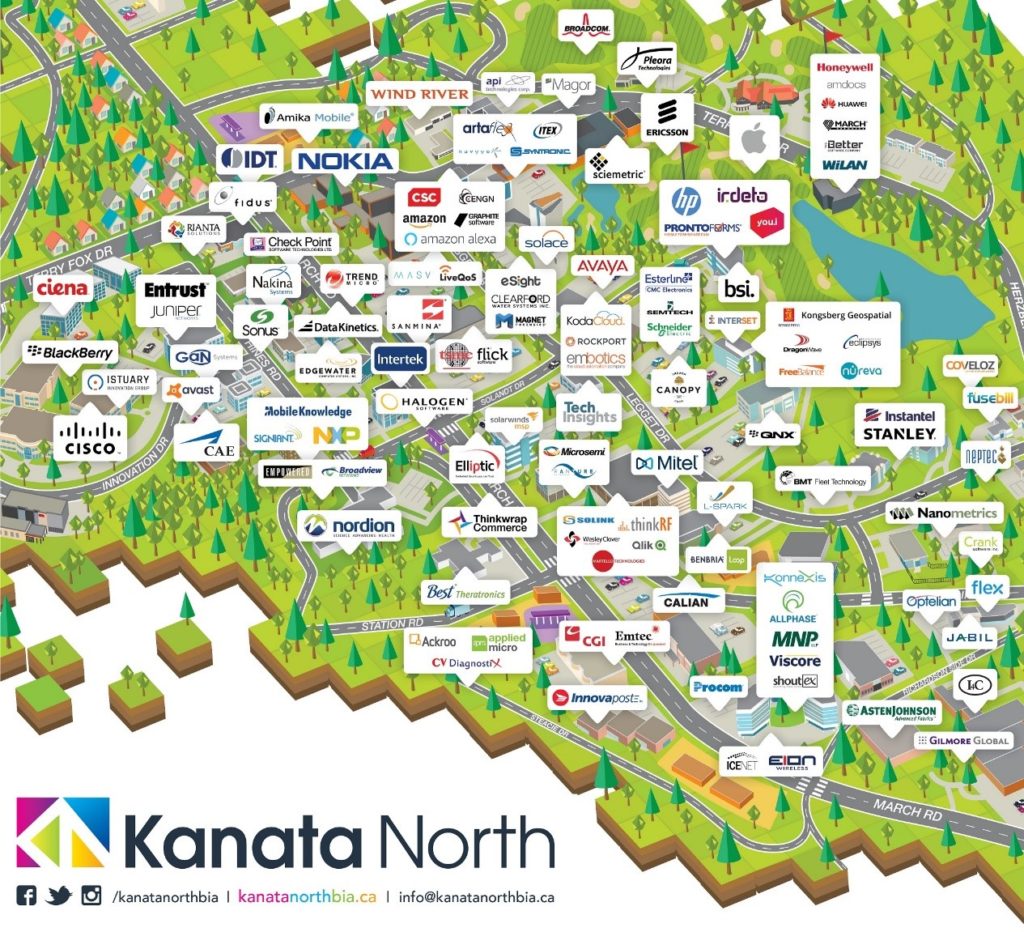 The 62 labs Daize references the significant impact the research labs of the federal government has on the tech ecosystem here, and that competitive advantage for the Ottawa tech scene is not well understood or communicated by us locals.

The keynote speaker was Don Smith, formerly the CEO of Mitel Networks and now of Wesley Clover, the Sir Terry Matthews venture capital company. Smith has a long history of involvement with the tech scene in Ottawa, and brought a refreshing view of his world to this real estate-centric crowd.

Smith made an almost off-the-cuff remark with respect to Moore’s Law. In 1965, Gordon Moore observed that the number of transistors in a dense integrated circuit doubles about every 2 years. He posted it in a paper that predicted this rate of growth for at least a decade. Smith pointed out that Moore’s Law, as this paper became known, has been accurate for about the fifty years since he made that observation. What was shocking is just how much dense an integrated circuit is now, because 2 to the power 25 = 33,544,432.

That integrated circuit of 1965 is now 33 million times more dense. That may help explain this concept for those of us not in the tech world who struggle to keep up with the impact of significantly more computing power as it affects our business and our lives. 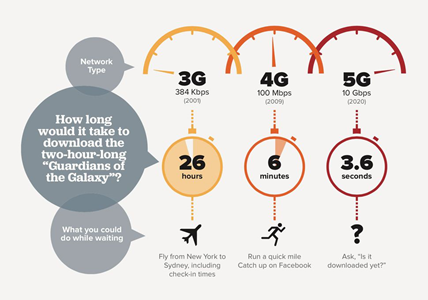 So far we have dealt with computing power dramatically improving by doubling about every two years. The next big disrupter Smith pointed to is the impact of 5G networks, and their ability to dramatically increase capacity for video. The transition from 4G to 5G is increasing capacity by a factor of 64 (if the math is right). He said, get ready, because whatever impact the increase in computing power has had on your business and your life is about to be dwarfed by the impact of 5G.

Smith said many firms in Kanata are working on 5G networks now. Many expect delivery rolling out in 2020.

What is always difficult for casual observers of the tech ecosystem here is to figure what exactly is the tech of any given firm, whether SaaS or ICT or biotech et cetera. Paul Asel in his really good guest blog in CB Insights identifies four eras of the tech evolution and that helps explain some of the transition the tech scene is experiencing here:

Asel said this evolution had been predicted by Alvin Toffler in his book Future Shock published in 1970, as Asel suggested that “… each new combination of technology augments prior technologies, generating a systemic impact disproportionate to the innovation in isolation.”

The fortunes of some locally famous tech principals illustrate the evolution of firms and fortunes as tech made this metamorphosis, as they both contributed to and maybe suffered from the resulting disruptions.

It is interesting  how Toby Lutke was concerned with the state of Shopify’s mobile app as of August 2015, and how he thought it could result in them becoming disrupted quickly. He specifically mentioned avoiding the fate of Nortel and Blackberry. This Globe and Mail article reports on the challenges faced and how Shopify corrected that shortcoming. Since the mobile app revamp rolled out in September 2016, quarterly revenues increased by 72% to total US$171 million for Q3 2017.

Oliver Kershaw at Avison Young was the moderator of the office market session at the forum. He provided slides for the A&Y Ottawa Q3 Office Market Monitor that in part highlighted notable lease transaction in the office leasing market. One highlight is that of all the deals mentioned, the tech community was responsible for 7. They included:

In addition to the list above, these 7 other tech deals were notable in 2017:

Also worthy of note is the financial strength of those tech firms doing these deals. This is a stark contrast to the heady 1996-2002 expansion days when many firms were weaker financially.

Yes, there is an element of leasing activity associated with private firms running on venture capital or private equity or both, to get to sufficient monthly recurring revenue in a large total accessible market to drive a success Initial Public Offering. It should be noted that most of the leasing shown here was completed by earlier vintage, well established firms. The SaaS urban live/work/play cohort seem focus on downtown or close to it.

From the outside, Ottawa is usually thought of as a government town. For those paying attention, there is a great revival of the tech scene, with a much stronger base for long term growth and all the drivers to accelerate success in the near term including:

The consensus view in Ottawa is that there is more to this tech revival than the commercial real estate industry tracks or reports on, and that the strengths for this pillar of the community are poorly understood and communicated by us locals. We are doing the real estate investment community a disservice with this underreporting.

Maybe some locals don’t want you to know this.