I am still struggling with what to do in a “balance sheet recession.” That is what Canadian investor Stephen Jarislowsky described as the outcome of the Lehman Brothers collapse – a recession driven by everyone looking to repair their individual balance sheets and inflicting the paradox of thrift. 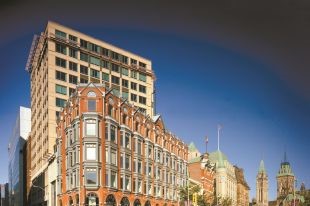 I lived through a real estate recession between 1992-95, but this one is somehow different and is sending confusing signals.

Three local property transactions – the Chambers Building, the Telus Building and Export Development Canada’s new headquarters – illustrate this confusion. They point to how the investment market was affected by the Lehman collapse in September 2008, which I’m using as the line in the sand between the highly aggressive investment market up to 2007 (for the U.S.) and into 2008 (for Canada), compared to the very tight credit conditions of 2009 that only started to loosen in 2010.

This Elgin Street property is a 211,000-square-foot class-A office building that combines three heritage buildings fronting Confederation Square on Elgin Street with a 14-storey tower built in 1994. Seventy per cent is leased on a long-term basis to the National Capital Commission and is subject to a land lease.

Allied REIT bought The Chambers Building in November 2011 for less than $100 million – say $95 million – and a cap rate in the mid-six-per-cent range. The sale is scheduled to close this month. It is convoluted, as there is a land lease to the National Capital Commission, and the lease participates in total gross rent.

The seller came to market in 2006 with the same agent, had pretty much the same rent roll and rental income growth, yet no sale was concluded. The agent said they had the right buyer, but not at a price at which the owner would sell.

What is notable is that prior to the Lehman collapse, the market saw this as expensive pricing and a little unusual with a convoluted land lease. It is trading at $450 a square foot – without any value for the land, and no value for the building at the end of the land lease – and a cap in the mid-sixes, so is not inexpensive by any measure.

What is it then that changed?

This Slater Street property sold in January 2012 for $60 million. The sale price is equivalent to a cap rate of 6.3 per cent and is approximately $550 per square foot.

The Telus Building is a class-A, 111,000-square-foot LEED Gold office building in downtown Ottawa. It is fully leased by Telus for a 15-year term, and was completed in 2007. Morguard managed the building for DEGI (Deutsche Gesellschaft für Immobilienfonds mbH) and effected a sale to Greystone Managed Investments, its largest client.

DEGI bought the building for $66 million in 2007 at around the peak of real estate markets worldwide. The investment metrics at the time were a 5.75-per-cent cap and about $605 per square foot. DEGI has incurred a loss of about 10 per cent on the purchase price and had a gain on the Canadian dollar-Euro exchange of about 7.5 per cent. When factoring in some principal repayment on the existing first mortgage, it likely means it about broke even on the trade.

The DEGI purchase stood out at the time for the price per foot of building. It has declined to $550 per foot from about $605 per foot. What is notable is that the pricing differential from the top of the real estate market pre-Lehman collapse to the post-Lehman recovery is about 55 basis points.

What is confusing for me it that the first sale was described at the time as an anomaly and maybe as an illustration of the market at the top. If that is the case, is a 55-basis-point correction sufficient?

The sale of the new EDC Building closed on Jan. 24 for $165.45 million. Manulife bought this from Broccolini and Canderel. It is a class-A, 472,000-square-foot LEED Gold building in downtown Ottawa leased to the Crown corporation for 20 years.

Hired by EDC to construct the building in 2009, Broccolini and Canderel were caught in the credit squeeze post-Lehman collapse. Unfortunately, they started to need capital to complete the development at a time when it was generally unavailable, particularly with real estate of such a scale at such an early state of development.

The difficulty they encountered was the lack of debt financing available for construction. Lenders were uncomfortable with loans in excess of $30 million, and were insistent on a clear exit for their debt investment. Broccolini/Canderel struck a deal with Manulife for its sale about two years ago.

The cap rate is reported to be between seven and 7.25 per cent, or fully 70 to 95 basis points higher than the Telus building, with a longer lease at a lower rent and a stronger covenant. The gain at closing from cap rate compression since the purchase was struck is a minimum of $27 million. This is likely the best buy of the three.

The confusing signal for me was how quickly the credit markets closed, and how small the window was in which the credit markets struggled. I continue to wonder if this magic combination of low bond yields and tight spreads will continue to provide liquidity for the investment markets, or more importantly, what event could return us to the tight credit period that Broccolini/Canderel experienced.