It was about eight years ago that PWGSC began to talk about its plans for office accommodations in the National Capital Area (NCA). The plan involved: getting the private sector to build some new buildings for it to occupy; increasing the availability of options for it in the central business district and pushing the balance of landlords versus tenants to favour tenants; making its work places greener and more sustainable; concentrating buildings on public transit routes; and, housing more of its client departments in the suburbs.

These points were part of their 2010 Ottawa Real Estate Forum presentation: 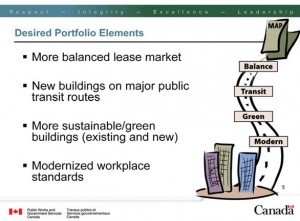 More recently the milestone for federal government office space occupancy in the NCA has been Budget 2012. This budget had all departments and agencies reduce their operations by between 5% and 10%. The departments and agencies were given roughly three years to implement these reductions. As many of them back-loaded the implementation of these reductions, many of the changes driven by Budget 2012 are only now affecting real estate requirements.

For those of us in the commercial real estate world, our experience of federal government machinations is through PWGSC in its capacity as the custodian for office space rental accommodations in the NCA (Ottawa and Gatineau). PWGSC is the mandatory service provider of office accommodations for federal departments, boards and agencies. One of the PWGSC contributions to Budget 2012 was adoption of Workplace 2.0.

That is the new design philosophy for how it allocates space to promote a more collaborative approach to a work place environment. Workplace 2.0 aims to reduce average footprint per employee from 18 m2 to 14 m2, a reduction of about 22%. This program is similar to that adopted by many other major office space users as they look to optimize their operations by levering the impact of tech advances in work place design.

Since the release of Budget 2012, the sense is that there is a double whammy about to affect the office leasing market: the departments are getting smaller operationally, something between 5% – 10%; and, that reduction will be compounded by Workplace 2.0 as the footprint per employee is reduced by 20% +/-. The other sense was that it could be difficult to sort out how that reduction would affect an inventory of 15 million square feet of owned office space and 20 million square feet of leased office space.

Time is a funny thing in this discussion. The Budget that is most affecting the operations of departments that gets translated into real estate demands is from 2012. Keeping in mind that within the NCA the federal government operates in 35 million square feet +/- of office space, PWGSC finds itself dealing with leases expiring in two to three years from now, as is typical for any organization dealing with large (50,000 sf plus) office mandates.

Also keep in mind that while PWGSC is custodian (pays the bills) for rental costs for office accommodations, it is the client departments that determine their space demands, and that planning process can take a couple of years to result in leasing transactions. Lastly, please keep in mind that while the departments had three years to implement the operational cuts of Budget 2012, PWGSC has seven years to implement the resulting changes to accommodation requirements.

To help keep track of this PWGSC activity, I surveyed the landlord community in December 2013 to find out who had space that the federal government would not renew in. I identified about 670,000 sf of space, with another 500,000 sf alluded to but not confirmed as coming back to the private market on lease expiry. 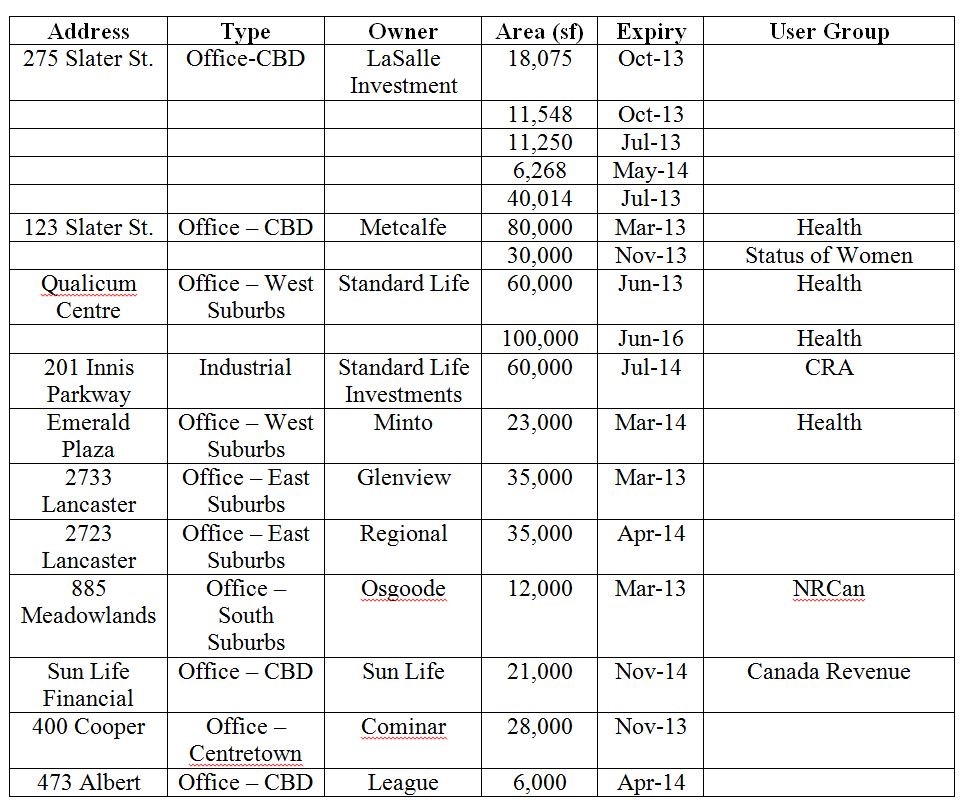 I conducted this survey again this month, and it tracks roughly another 1,800,000 sf of space that will not be renewed running from Jan 2014 up to what the landlord community knows (or admits to) now. 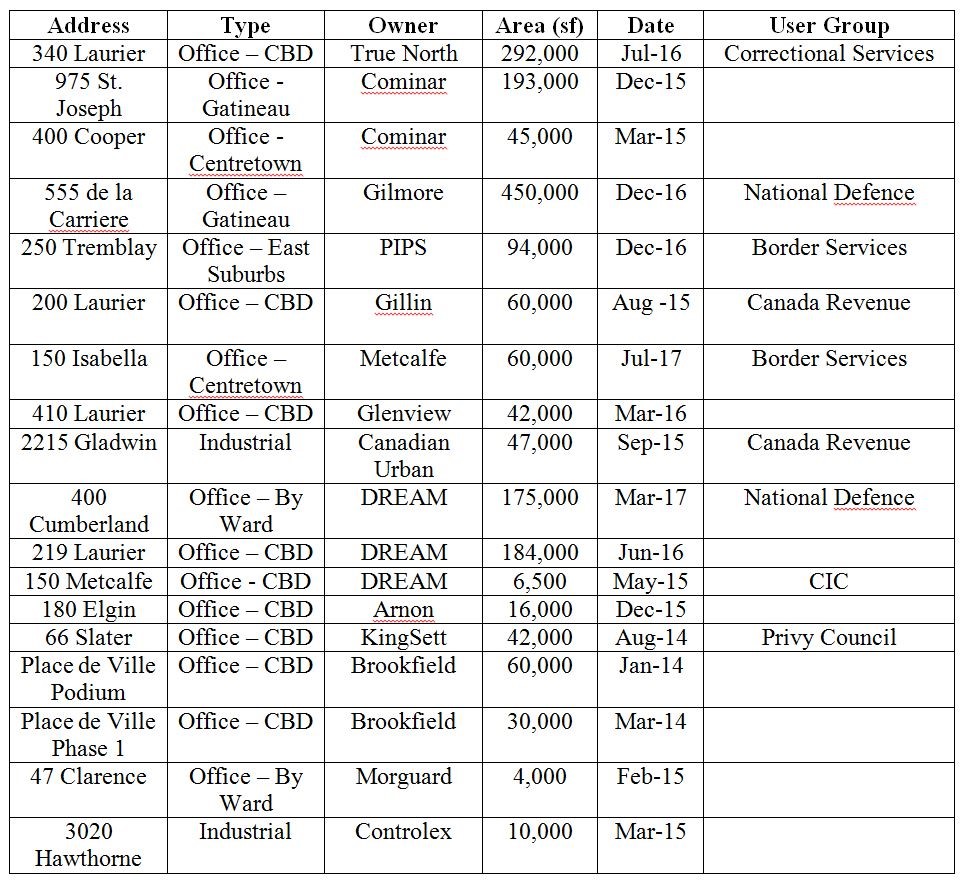 What is not clear yet is the impact on a building by building basis for the consolidation of the Department of National Defence (DND) in the Carling Campus (the former Nortel Networks Campus) of 2.35 million sf the Government of Canada acquired in 2010.

Defence personnel are currently distributed in over 40 locations across the National Capital Area, mainly located in downtown, commercial leased spaces. These locations are costly to lease, refit, secure and renew on a recurring basis. The consolidation will see DND moving from over 40 offices to 7 major locations in the NCA, achieving $750 million in net savings in accommodations costs over a 25 year period, plus an additional $160 million for DND in cost avoidance.

You can find a more recent and technical description of the scope of this undertaking here.

The “Before” illustrates where DND is located now. The “After” illustrates DND’s planned footprint after consolidation. What strikes me is that the two lists above do not include many of the red dots that disappear in the “After” illustration, and that implies that there are potentially more vacancies to come. There is more space to be given back to the landlord community.

The first survey captured about 670,000 sf of vacancies, and failed to identify another 500,000 sf. The most recent survey captured an additional 1,800,000 square feet. That gets a total of about 2,970,000 sf of office space given back to landlords. That represents about 11% of the PWGSC leased portfolio in Ottawa once I exclude the Gatineau properties and the industrial properties in the surveys above.

Please also note that what I have tracked is gross additions to vacant inventory, and not net additions. I have not determined whether some of the space that PWGSC decided to vacate is subsequently leased by them. As a result, the surveys may overstate the impact of PWGSC downsizing, as in some instances buildings that were notified there would be no renewal have subsequently secured other leasing (e.g. 219 Laurier winning the 120,000 sf tender call).

What are you finding for the PWGSC for Ottawa? Do you have other examples of PWGSC giving up space?